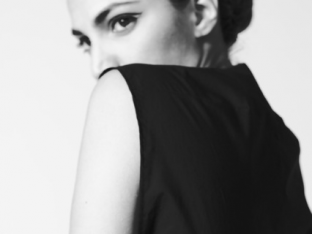 Her interest in shapes and forms began at an early age as her mother, who was an avid art collector and fashion fan, instilled her taste for art and creativity into her. Rayya had initially majored in interior design but her relentless passion drove her to explore new territories. After obtaining a degree in Fashion Design from Esmod, she joined Maison Rabih Kayrouz where she was head of design from 2006 to 2011. In 2009, she founded her own label: Bird on a Wire. Her debut collection of square shirts “dubbed “80x80x80” was sold at the Starch boutique in Saifi Village and later in the Katara Art Center in Doha. It was followed by a collective exhibition at the Beirut Art Center in 2011, entitled “Starch Your Summer”. After the success of her endeavors, Rayya decided to fully dedicate herself to Bird on a Wire. Bird on a Wire’s clothing line is now sold at Boutique IF in Beirut and the jewelry line at “The Odd Fish” in Beirut as well as online on the website “Not Just A Label” as of July 2013.

The average number of grapes it takes to make a bottle of wine is 600.